Sedona: A visit to Inspirational Drive 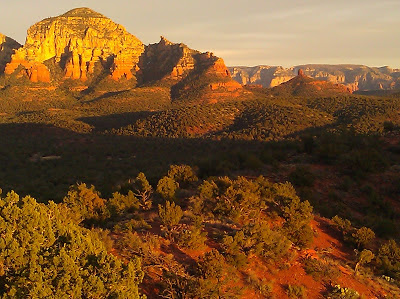 People flock to Sedona for inspiration, healing, connection, and so much more. Sedona is indeed inspiring, but I only learned after returning to Seattle that the house where I stayed was on Inspirational Drive. How appropriate is that?

Being home and back at work after only a few days there feels a little surreal. It's a bit like transporting myself out of this realm and into another. Everything you've ever heard about Sedona and its beauty or other-worldliness is true. And my perspective feels forever slightly shifted.

My intent was solely to visit and catch up with a friend of 20+ years who moved to Sedona from Vancouver, BC about five years ago. We met at work shortly after we'd both relocated from the US, newly married, and our status immediately connected us. While we've stayed in touch via phone, Facebook, email and text, our last in-person visit was three or so years ago when she moved her personal possessions from the chilly damp air of Vancouver to the radiant dry heat of Sedona.

She came through Seattle with a U-Haul filled with the contents of her storage space, not quite certain of her decision to move. I get that; it was hard for me to come back to Seattle, despite having grown up here. Sedona's small and the landscape entirely different, and it's a plane ride instead of a short drive away from everything familiar. But her family - daughter, mother, brother and sister had all moved here, in that order, and she wanted to be close to them. 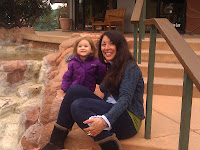 I have missed our personal connection, so a visit has been on my radar for a while now. But it was never the right time. So early this year, I determined it was now or never and to just. set. a. date. Time and resources finally aligned, or maybe it was meant to be.

The nature of things

They say everything for a reason, yes? This is even more pronounced in Sedona, so apparently it was no accident that I landed here now. I am transitioning into my role as coach, claiming my life journey as valuable, stepping into my natural gifts, and open to so much more. And more is what I got. Here's a sampling of who I met, where I went, what I saw and what I learned about:
Sedona is physically, culturally and spiritually rich. While it's a relatively young city (1902), its rock / sand formations have been millions of years in the making and it's renowned the world over (perhaps universes and/ or galaxies, too?) for its vortexes and the profound energy found there as a result. UFO sightings are common. Some call it a "spiritual Disneyland." And some of the Native American cultures believe the land is sacred and shouldn't have been built on at all. True or not, Sedona does a decent job of ensuring its design laws honor the landscape in texture, color and feel. And it's not hard to summon images of rugged pioneers seeking their fortunes amidst the iron-laden soils of this wild west outpost.

One thing I was surprised by, however - given Sedona's beauty and their apparent commitment to keeping it that way - was the seemingly limited recycling / compost options. I'm curious and would like to learn more about what they're doing, or not doing - and if not, why not. I would think, given the level of earth and general environmental consciousness there, that options for both would be everywhere. If Seattle can have compost and recycling bins in their shopping malls, well, anything seems possible. 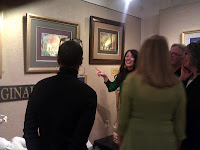 After a shuttle from Phoenix, I met Lori at the gallery where she works in Tlaquepaque, an art center in the center of the city, arriving in the middle of a new show opening. My favorite piece by the featured artist was called "Lightness of Being." Lightness of being has been an area of focus for me for the last couple years - reclaiming that feeling of lightness I recall from my unencumbered youth (usually noticed when I skipped school on a sunny spring day, but that's another story; I remember the feeling and want it back).

Hiking at Thunder Mountain followed the next morning, and we scored an Earth Wisdom jeep tour with Lori's brother that afternoon at no charge due to a cancellation. Earth Wisdom holds the only tour permit to access key locations that are otherwise inaccessible except privately with the right vehicle. Our fabulous dinner at Elote Cafe featured a tableside "hello" from its renowned chef.

Sunday coffee came with introductions to wisdom seekers, embodiments of spiritual masters, and shamans. And really good coffee. Shopping with Lori's daughter and granddaughter followed, and the weather turned overcast. We spent the last daylight hours at Cathedral Rock, a spectacular red outcrop, and one of four main vortexes. Back on Inspirational Drive, we watched a video about tapping into your own psychic abilities and Lori prepared a delicious, healthy meal. She later offered a card reading, and I gratefully accepted. She's a gifted reader, and I have new information to work with, and more tools to explore. 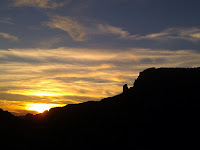 A Monday morning visit to Lori's daughter's place gave me insight into new technology that I don't have the words or understanding to explain. But I purchased a Level II pendant that is purported to increase my energy and/or vibrations. I will learn more and share later (I still need to read through this). But it's fascinating work, and I am happy there are people doing what they're doing. Our planet needs this. But it's even bigger than that. And again, I have no words. Yet. I didn't know it then but it's exactly what I wanted.

The shuttle back to Phoenix was as uninspiring as Sedona was inspiring, and it felt like a long journey back. The 'green' juice Lori made me for breakfast, however, suggested it might be time for an overall detox. It's rare that I'm happy to spend more than a couple hours at an airport, but in this case, I didn't mind. And it gave me time to reflect. 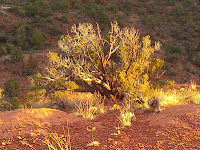 I entered this weekend with no expectations, no set plans, and a willingness to just be present and see what showed up. Grace, love and opportunity showed up for me, and I am again counting blessings. Lori and I have an ongoing friendship of give and take, sharing, supporting and helping each other, and this was evident throughout the weekend. I love what my friend is up to, and I think she feels the same about me. Inspirational, indeed.

Feet to the fire: Time to get moving again

I have now publicly committed to being a LifeWise of Washington ambassador with a promise to help model the way - with 29 other ambassadors, all at various fitness and activity levels - to a healthy lifestyle.

I stopped running for the most part in December of '09 when the temperatures hit freezing and I got too cold. And for whatever reason, I never got back into it with any consistency. I sit at my desk for work all day every day, and often go home at night and sit and do more computer-related tasks.

While I have made fitness a big part of my adult life, I've had a hard time getting going again. Up until last June, I was still going to the climbing gym (about twice a week), but other than the occasional walk, I wasn't doing much else between that December and spring, 2012.

So I got moving around Easter last year with Zumba, a little running, more walking and some Golden Gardens stairclimbing, only to end up on the sidelines by mid-summer with plantar fasciitis. Tight calves, hamstrings and hip flexors, as well as hips that could use more strength, all contributed. I've always stretched a lot when I'm exercising, but I really suck at it when I'm not. And I never developed a love affair with yoga. My lack of flexibility makes it frustrating and uncomfortable.

I think being part of this program will help get me back on track - keeping me focused on my goals and reminding me to at least do something. Even if that something is soaking and massaging my feet every night, and maybe just a few good stretches. Oh, and maybe a few pushups, a pull-up or two, and a little bit of core work. I can do this! Everything I do with a focus on healing will contribute to getting me back up and literally running again. Which is what I want. Really I do. So why is it so hard?

I am so ready for a physical outlet - I feel better physically, emotionally, mentally, and spiritually when I am moving, particularly when I'm outdoors. And I believe it absolutely when I say that we're really all we have, and we are our own health plans. Whether or not we have insurance. Sure, stuff can happen no matter what - I certainly don't mean to imply that it can't, but we at least have some control around managing our health, and I'd rather be proactive than just wait-and-see. My health isn't something I want to leave to chance.

So here's the blog post I wrote for LifeWise, which puts my intention out there for everyone to see.
Posted by Laura McLeod at 3:20 PM No comments:

This blog began as a gardening blog but has metamorphosed to cover all things growing - in particular my - and our collective - personal journey. Life takes some interesting twists and turns, and while the garden is a very special place for me, it's become a smaller priority in the face of bigger things.

The beginning: In March, 2009, I learned about Urban Garden Share. My partner and I had talked about sharing our space, and this fit perfectly. We previously shared our yard with a neighbor and friends, but our friends moved. So with help from UGS, we created a community garden and have met and gardened with delightful people we now call friends. Located in north Ballard (on the cusp of Crown Hill), this place was a family garden for over a century.

The blog is still about growing things. As I strive to find my voice as I make changes in my life, it's more focused on growing self: self-awareness; compassion, acceptance; about growing community: our interconnections, shared insights, and collective action; and about cultivating those things that sustain us - our passions, our health and wellness, fun and play, learning and knowledge. And yes, it's also my eclectic collection of observations, experiences and thoughts.

I hope you find something to relate to here. Please don't hesitate to share your thoughts with me.

You can find out more about me and what I do on my website.

Books worth a look